This is a remix version of an old song—-my sister-in-law nephew is the guy with guitar….we are sorta related!! Lol

Today I spent some time at my Mom’s. It was later in the afternoon and I was getting a feeling for nap time! Mostly because her house is always warm, well to be honest it is HOT! But that is to be expected, she is elderly. I can’t believe I just called her that. Never in all my born days have I thought of my mom as elderly. She never has been until now. Truth be known, if she knew I called her that she would probably skin me alive!

I wish that she could know. I wish she was the same, quick to set things straight, lady I have always known. She is but a shadow of her former self. Her mind has retreated in so many ways and her momentary memory is all that is left. Thankfully she is in good health otherwise, for which I am so thankful, it would be more sorrowful if not. Even so, she is sweet and kindhearted now, two adjectives I would have thought of her in the past, just not as obvious. She was always a good woman, strong and forthright. But she wasn’t much drama, pretty much just a straight shooter. “Just the facts!” (I must be more like my Dad…all drama!)

The time I spend with her now is hard and taxing. The crazy part is that it has gotten hard for me just in the last few months. Before I was able to take it in stride, dealt with it pretty good before, and I even felt pretty proud of myself and felt the need to help my sisters wrap their heads around this disease. Pretty smug considering now it is a struggle for me. I am not sure why, maybe because the amount of loss we have had lately. Losing my sister-in-law to cancer last year took a toll on me I know.

Daily I miss her. Daily I search my mind for remnants of her. I still have the last four voice mails on my cell phone she sent me. I listen to them often as well as the last stream of texts. She was reminding me to be careful on the cruise we were about to board with all the mishaps, husbands and wives falling overboard and all. I think she had an over and under bet on me and her brother and if you knew her and us that would be believable. We constantly ragged her poor brother about everything — not that he ever knew it! It was our own little world. Her being his OLDER sister made for plenty of wars. He was pretty obnoxious I am sure as any little brother can be. I think their mom would make her take him on dates with her and her boyfriends! Recipe for murder I say!! SO who could blame them for their lack of warm fuzzies about each other! She would describe the little boy and I would defend the grown up man — a never-ending test of wills. I eventually won that battle and she agreed. She loved him despite herself which is the best ending of all.

I often remember the crazy conversations we had. One minute we would be deciding on what to cook our crews for supper and then without skipping a beat go into a story of our many yard sale adventures and my search EVERY TIME for a bathroom. YES, I did ask people to use theirs. She would go hide in the car, humiliated yet laughing her a#& off! (only word that can be used there, it is a Bible word, by the way! Just in case, forgive me Lord!) It would almost be a dare and the funny thing was people would let me. She would say she couldn’t believe I had the nerve to ask and I would say I couldn’t believe they would be so dumb to let me!! Me a stranger, though my only agenda was to potty and not have to leave such a good sale to drive a gazillion miles to a gas station. As a side bonus I did get to see some pretty cool houses! We were also famous for dragging home old furniture from the curbs….good times! The best of times and had I known they would be over so soon….whew makes me tear up again.

So when I go to my Mom’s house I guess I am realizing that the time will come when I will have to say good-bye to her. It is all so “in your face” this slow death. It is a fact of life that is a bitter pill. Not for the one who dies but for those of us left behind. I know where my sister-in-law is and I know she wouldn’t come back if given the choice but, still so very hard. Today her son made a funny (to me) comment on Facebook about a driver in front of him and I belly laughed because it was HER spit out! She, like me, was a verbal driver and had no patience for ignoramuses who pretend to know how to drive and when I read his comment it was hysterical.

Things like that give me comfort…maybe I am the only one, but when I hear or see something that reminds me of someone I love it is soothing to my soul. Her children do arise and call her blessed and every time I see a red bird — Cardinal — I am reminded of my Mom, though she doesn’t remember know that she used to love to see them. I do and it soothes my soul. I too will arise and call her blessed. 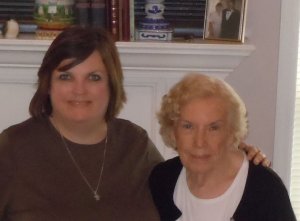