Today I was on my way home from my Mom’s house, after enjoying the little time with her while she still remembers me, walking her yard and looking at all her many flowers. I have commented before how she is this amazing ‘flower-whisperer’ — and I do wish that was the gift that she had given me — but, NO! I do love them as much as her but the ability to stick a lone seed in the rough dirt and grow an abundance of beautiful flowers … well that gene must have skipped me! Try as I might I only have about a tenth of her success … probably because of the dirt and rain and sun, no help from me!

It is something that causes me to marvel at her ability to get up everyday and do her chores and at eighty-three it is a blessing she still can.

This brings me to the … on the way home part! I pulled up to a stop light in the rural part of two towns that are seemingly conjoined and I spied an old man, sitting in an old school wheel chair out near the road, pulling a pretty good size tree limb as best he could. Backing up, scooting his feet backwards, hauling that dead tree limb across his yard! With each little scoot of his heel in that kind-of-high grass, he pulled with his one good arm, the other looked paralyzed, but with all he could , he was clearing his yard of debris. It seemed impossible for the wheels to turn very well and it made me tired just watching him.

So as I sat there at this 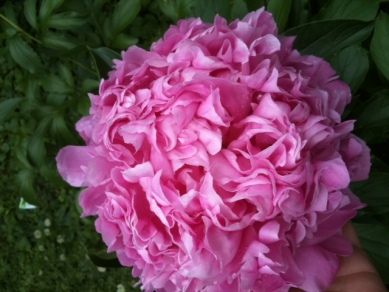 traffic light, in my nice car with air conditioning, a body that is without any known conditions (I am usually holding out hope for a reason for my “out-of-shaped-ness”) (besides the obvious! which is my point) and I am humbled by him. I watched him and he watched me, or I felt like he was … guilt I am sure! He had on dark glasses and what appeared to be not so many teeth and it reminded me of my own dear grandfather.

He suffered a stroke several years before he died and he would not let that get him down. Papa Maxwell was a strong man, lived a hard life but took care of his wife and six (ugh!) kids the best he could. He was my Mom’s Daddy and she loved him more than anyone else, probably even more than us kids if the truth be known. When he suffered his stroke it took a bit for him to get his bearings but it wasn’t long before he was up and going. He had a riding lawnmower that he rode all over his yard and property. He even rode it up and down that old country road … everyone knew to watch for him. He was not going to be that old guy who sat in a chair and died. He was tough and he kept on keeping on until he couldn’t anymore.

Eventually he asked to be Baptized. If I remember correctly, Papa Maxwell never went to church very much .. .or ever. My Granny did, every time the doors were open but I don’t think he did (my family may correct me if needed). But at this point in his life he felt the need to do the thing he knew to do. Makes me wonder if my Granny had ever nagged him about it? Stupid question I guess, she was a wife!

My theology tells me that Baptism isn’t salvation, we must make a conscious decision in our hearts to accept Christ then be born again. Then, as a sign of what has happened on the inside we are baptized as a public confession of our faith.

I never knew if anything ever happened in that order with my papa. I wouldn’t have understood any of it back then anyway and, if he had spoken, it would have been (because of his stroke he couldn’t really speak real words) a cuss word, which he did speak, not one of the big ones, only the same one over and over.

This always cracked me up. Somewhere in my crazy mind I think if I couldn’t speak but a tiny bit, a cuss word would come in handy and I would worry about etiquette later! But, I do know one thing … GOD saw his heart and HE knew what my Papa wanted to do and say in the bowing in reverence through this baptism. And I believe HE honored him in that and my Papa is there with him now.

What does that do to my so-called theology? I don’t know but I believe it anyway!

My Papa worked hard his whole life and was good to every one. He was a fair and just man, not perfect but a good man all the same. SO, when I saw this poor old man today it reminded me first to pray for him, that if he needs help someone will come to his aid. Also, to get up off my keester and make something of my self.

Truth be known, even if someone had stopped to help that old man he probably would have said NO! That’s the way old people are. They don’t make them that way anymore. I am glad that I am old enough to know folks who are that way. I am still humbled by the older generation and the fortitude and character they have. If I could relay this to my own kids I would be a happy momma!

Lord, bless that old man and all senior citizens. They have a right to be crabby — they’ve been pulling us all along for generations!