If my memory serves me correctly, the old classic movie, Alfred Hitchcock s, The Birds (which by the way scared the you know what out of a whole generation, including me!) was based on a joke and these two love birds that the beautiful actress, Tippi Hedron who played Melanie purchased for Mitch, who was played by the oh so dreamy Rod Taylor who, was very suave in his flirtations and the misfortune of the young ingenue turned into a frightening twist of fate…..all because she was playing a joke. I had always thought that the Love Birds were part of the problem also and the presence of them on that island caused a stir in the atmosphere. The other birds didn’t like them! I would yell at the television…..”let the birds go”!!!!!!!! Sacrifice them, set them free, then maybe the scary birds might leave. 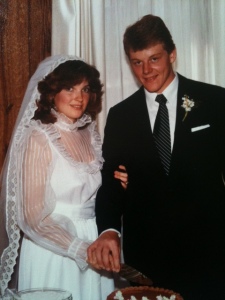 This brings me to my point (I do usually have one even if it does take me a while to get to it!). When there are Love Birds the scary birds try to get in between them. Something about LOVE that causes the masses to gang up and peck away….peck, peck, peck….little by little because apparently being happy makes angry birds mad! BUT….the good news is….. Matthew 19:26 –Jesus looked at them and said, “With man this is impossible, but with God all things are possible.” After thirty years of marriage (YES…..30!!!) I can say truthfully that what started as a dare from my roommate at the time (she dared me to ask that cute blonde guy out and of course I did!) has ended up a love affair that has not ended. He was the one…..!

Our life has not been without trials and the peck, peck, peck of angry birds. No one gets through this life without them. But I know that we have always put GOD first before even our own wants and HE has kept us true to one another. We married young and stupid which was a blessing and if anyone of our kids do the same thing I will lock them in a room!! I can not even think about the horror his parents must have felt at the thought of their precious only son bringing home this scraggly girl and even more asked if I could live with them for a few months before we were married. Makes my blood pressure go up at the thought of one of our kids asking that question. Lord that would be too much! But they did it and I was so smitten with this guy I was willing to follow every rule. Soon they helped us find a little house, cheap rent and a little creepy but all ours. We were married on this day April 24, 1982 on a Saturday afternoon. Happy Anniversary my sweet husband! We were on our way!

Within a year we were able to build a little house (remember the previous scripture! It was the only way!) and found out our first-born was on the way. He would be a boy and life as I knew it would be gone. I read in a book once that stated … having kids is like a tattoo on your face…… Eat, Love Pray by Elizabeth Gilbert. Well that about sizes it up, there is no getting rid of it! A life of joy when a baby arrives and of course the peck, peck, peck of evil haters! Raising children isn’t always easy….The story goes on, more children…girl, boy then nine years later boy again and many moves and life changes. But through it all, I have laughed and loved bigger than anyone I know. This man I married gave me a life of joy and peace and love as well as knowledge of a savior for which I had ever known or been taught. This man I married led me into a world better than I could ever had thought possible. I had always, my whole life wanted to live in New York, NY but I can after 30 years say I haven’t missed a thing!

If he sticks with me for another 30 plus I look forward to even more love and fun and passion and he still is the man of my dreams. We are two LOVE BIRDS that are loving life in our cage, protected from all the angry birds out there. We have probably broken a few records, I know there were people who sat in the church and watched us marry who felt confident we wouldn’t make it and to be honest…who knew we would? I know I was determined to go longer than my own parents and back to that scripture again…HE was on our side! So for anyone who has hopes of marriage and the chance of it lasting….look up. It can and will be the most fun, aggravating, frustrating, laughable, scary, meaningful decision you may ever make. I am not sure if we had counted the costs and really planned so much if we would have either one followed through with it, we just went with our hearts and I knew I had found a keeper!

I am thankful for him and his life lived before me and our children as a testimony of faith and he still makes me blush my heart leap. No one ever loved me the way he does and I him and forever will I be thankful for the life we have had.