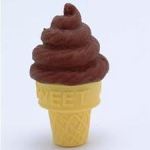 Maybe I am the only one that seems to have problems when eating an ice cream cone!?!

The dilemma is when you ask the soft serve ice cream server to only give you about half the size he usually does and he stares at you like just asked for it free! What is so weird? Why would it matter to him? Saves money for the store. I only want a smaller amount of ice cream and NO I don’t want to reduce the price! I don’t mind paying the full amount. I’m just incapable of eating that much ice cream! Silly as it sounds but, I can’t!

Even though I am so happy to be back in East TN and, even more, the beautiful Cades Cove Park which is a “loop” that’s very scenic.

Also fun to do on a hay wagon but, on this day we were in a car. After our drive we go into the park store with all the sweet souvenirs, Smokey Bear and all, and buy the best one of all — soft-serve Mayfield brand ice cream. Only the best, I must say and the cones were HUGE. More than I could eat (believe it or not!) and I just wanted less, no tricks Sir, just can not eat it all.

After the funny looks, he was kind enough to back off a bit though it was still too much, we go outside to bird watch and to my joy — a red-headed woodpecker, one of my favorite birds. They could not be cuter! I do have a history with these birds. We had one that lived in the trees for a season at our home and I enjoyed watching him so much.

So the trouble of keeping my cone from melting all over my hand while attempting to watch the cool bird was more than I could stand! Ugh!! Silly Ice cream! Makes me so nervous trying to eat fast enough to keep up with the incessant melting.

Geeez we can send a man to the moon and we can’t make ice cream give us a break! Drip, drip, slurp!

And the eventual squishing of the excess ice cream out of the cone — wasting good ice cream, which was my goal to avoid to begin with! Let’s just be real. The cone was my goal in the first place. The ice cream was only the means to an end. So after several brain freezes and nervous moments of OCD fears of the chocolate drips ending up on the front of my shirt (bad thing while away from home (a limited amount of clothing packed!) the woodpecker left us. My shirt was still clean and I finally got to eat the cone.

Onward for more fun on our vacation weekend! And more opportunity for nervousness! 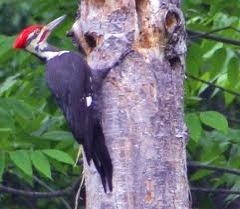